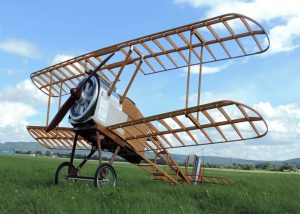 Okay, yes it was not the most expensive plane to build. Here it is at the 2016 Fairford International Air Show. It did however; win the prize for the cheapest, as “Humphrey”, our half-size Sopwith Camel plane, with its wingspan of 16 feet, cost NOTHING, ZERO, ZILCH.

The challenge the Men in Sheds Cheltenham & Gloucester were given, it had to be build from recycled material. This often meant scrap and stuff found in skips. The Airframe and wings came from old wooden pallets, cut, planed and formed into many shapes. The engine was a flowerpot painted a metallic grey, the cylinders’ used to be baked bean tins, the landing gear came from an old pram. The pilot’s seat was a child’s wicker seat, the pilot a trusty old teddy bear. The propeller was an old builder’s cement mixing board sanded to shape, the propeller shaft a broom handle, and the main body came from an old wardrobe. Dozens of bits of scrap were used, right down to the tail landing skid, a large soup spoon.

A lot of people that viewed the plane both at Fairford and the Jet Age Museum were surprised, to quote one “When you said it was a model, I was thinking of something that would fit into a cars boot” and were amazed at the thought and planning that had gone into its preparation, by The Men in Sheds of the Cheltenham branch.

“Humphrey” was never intended to fly, as if it could, with a flowerpot as an engine and baked bean tins as cylinders, but it has been on a few “trips”, the last one was to Cheltenham Racecourse November 2018 to commemorate Armistice Day. Since then it has been back in its hanger at Dundry Nursery.